That time we nearly got frostbite – Travel Adventure Nightmare

When you look back on your life, you tend to remember those adventures that had stand out moments. This is one of those adventures. A mission with two friends that took a completely unexpected turn and ended with us having to put condoms on our feet to avoid frostbite. Happens to us all at least once, right?!

The adventure started as all good adventures do. With what we fondly define as the “Dream Team” which consists of myself, Roger and Kalle. Quite possibly the most adventurous friends you could ask for. Randomly, despite none of us living in LA, we had all ended up in the city for a long weekend. We decided rather than hanging with our respective groups of Americans we would wake up at 4 am and set out on an adventure of a lifetime.

I had purchased a load of laser tag equipment and brought my drone to film the entire experience. We could not wait to run around a ghost town blasting lasers at each other and acting like kids. This was some serious Power Rangers shit. Pew pew pew!

The ghost town is called Bodie.

Bodie is a ghost town in the Bodie Hills east of the Sierra Nevada mountain range in Mono County, California, United States, about 75 miles southeast of Lake Tahoe.

Now for someone who usually does his research, that one sentence I just pulled from Wikipedia would have been enough for me to get the team more prepared for this trip. However, my selective reading resulted in me seeing only a few key words. ‘Ghost town’ and ‘California’.

If I had seen the fact it was located in the “Sierra Nevada mountain range” we might not have gone to Bodie dressed like this.

Shorts, trainers, nothing waterproof, nothing warm. Just like a couple of city boys and a beach bum (that’s me!).

But we didn’t see that, we were in sunny LA enjoying the heat, and hey, California is hot, right?! (just to add to my stupidity I used to live in Palo Alto, so I know this isn’t always the case) but alas, we took off in our car towards Bodie, a 6-hour drive from LA.

We felt good about the trip; we had more camera gear than National Geographic, more snacks than an army would need and enough caffeine to kill off a small giant. Everything was going perfectly; we were making good time, we had great conversation and banging tunes.

When we eventually pulled into the dirt road up to Bodie, we were excited. In a few minutes, we’d be at one of the coolest ghost towns in America with fucking laser tag and drones! This was going to be AWESOME!

Now as I said before, I was with my two most adventurous friends. Did you ever think either of these signs were going to stop us going to Bodie?! Hell no. We parked up, snacked up, caffeinated up, and started to walk. We walked, and we walked. Now seeing as Bodie is in the Sierra Nevada mountain range — as you might expect we didn’t have any signal, so we didn’t know how far the hike would be; but we knew it couldn’t be far. We we’re so wrong!

Slowly, the scenery changed, and snow started to appear, we looked out at the snow as a welcome addition to our adventure. Afterall, we all used to live in Norway; it’s where we met. Two Vikings and one British guy, we were used to snow, and even in shorts and trainers; we welcomed the beautiful snow… for the first hour!

Our snow track eventually turned into a steep mountain incline. That incline eventually turned into the most amazing views over the Sierra Nevada mountain range I’ve ever seen and eventually, 5 hours later, we ended up at Bodie. We were proud, we had made it; we were awesome. The hardest, baddest mother fuckers in Cali and better yet – we had the entire place to ourselves.

Then reality came down, otherwise known as the sun. We realized our feet were completely numb and blue, we had to hike back down and we really really didn’t want to.

We tried everything to get our feet prepared for the hike back down. We knew we were minutes away from losing some toes to Bodie and we weren’t going to let a Ghost Town take us down. (Although that would be a pretty epic horror movie!) We had aluminum foil and a rather impressive amount of condoms thanks to Kalle!

Even as I started sliding the condom over my foot, I imagined how my girlfriend Nadia would laugh at me when we eventually got. I sighed, I knew this would not only be an adventure of a lifetime but give her comedic ammo against me for years to come!

We eventually condomed up after many failed attempts due to laughing 🤣 ourselves silly and started to make our way; before we were forever lost in the pitch black mountain range. Three friends 8000 feet high in the mountains, completely alone with condoms on our feet. We leveled up our friendship that day!

This is an adventure that will stick with me forever and not just because we nearly got frost bite. It showcased how much adventure means to us as a group of travelers. Taking over from common sense and providing us with memories. We may have been cold; we may have hiked for 8 hours, 16 miles and burned 10,000 calories. We may not have shot lasers at each other, but it was still the adventure we hoped for, and better yet it was an adventure we never expected to have.

So here’s to adventure… and the power of condoms to avoid frostbite.

Please, share your stories with me, I’d love to hear them!

You can also watch parts of our adventure on YouTube 👇 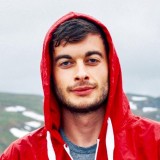 I spent the past 4 years traveling. Here are my favorite destinations